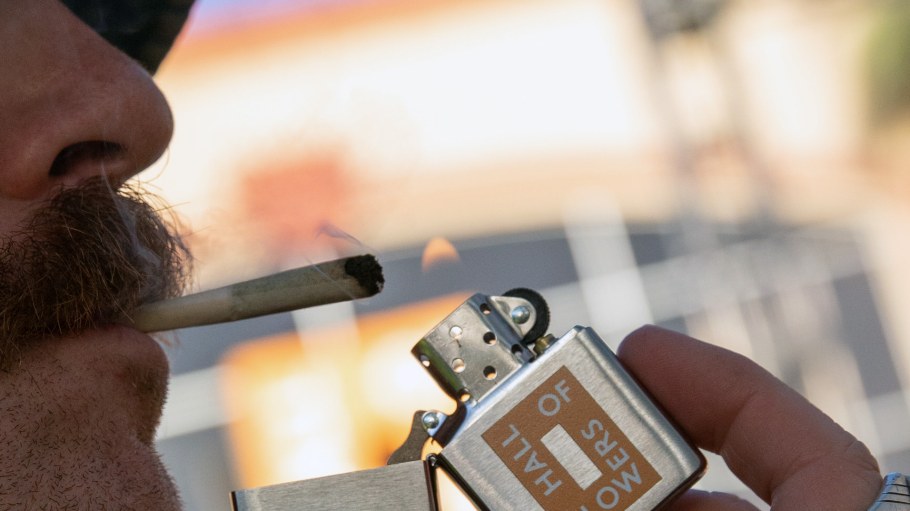 Guess which one had all the buzz?

Even the women working the FashionGo registration booth Thursday morning at the Palm Springs Convention Center had FOMO.

“We hear they are shuttling people in from all over and traffic is backed up on the 111 [freeway],” they said of Hall of Flowers.

Inside the convention center hall, the 100 or so FashionGo vendors were no happier, looking at the passersby like high schoolers at prom waiting to be asked to dance.

Meanwhile, about five miles east, in a space that was formerly a Burlington Coat Factory, Hall of Flowers felt like the Coachella of cannabis with a grassy, pillow-strewn outdoor consumption lounge, an on-site dispensary, food trucks and an enthusiastic crowd down to hang in 90-plus degree heat. 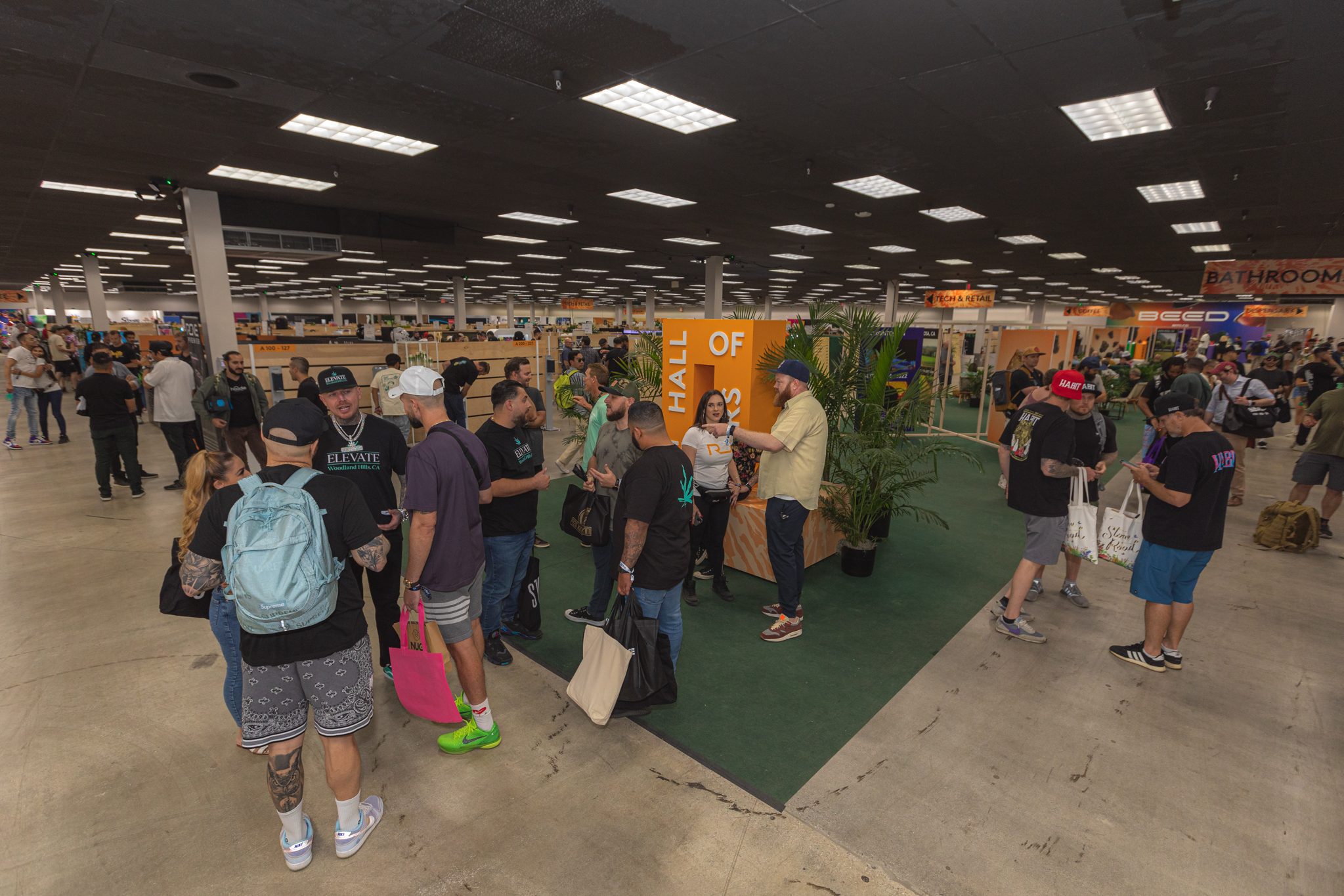 California has been at the forefront of cannabis growing and culture for a quarter century, and is one of 19 states that currently allow recreational consumption. With an estimated $97 billion in U.S. legal and illicit sales in 2021, cannabis consumer spending now exceeds spirits ($86 billion), according to recent research by New Frontier Data.

Not to be confused with its non-psychoactive cousin CBD, cannabis is about getting high, so the focus was flower. But there was some fashion sprouting at the event, where the wardrobe among attendees included Gucci and Louis Vuitton bags, streetwear, sneakers, pot-leaf leis and pot-leaf print bucket hats from the L.A. dispensary Sherbinskis on trendy Fairfax Avenue.

Like at most trade shows, there was swag aplenty, from logo tote bags, lighters, grinders and papers to unmedicated versions of cannabis hot sauce and gummies, all intended to grow budding brands’ loyal tribes.

Merch is an important part of the business for dispensaries.

“Cannabis is very culture-driven, and let’s be honest, there’s a lot of cannabis companies doing all their marketing through the sales of bags and T-shirts,” said Whitney Beatty, founder and chief executive officer of Josephine & Billie’s.

Opened last year, the new, speakeasy-style pot shop named after Josephine Baker and Billie Holliday, which counts Parent Co.’s Jay-Z as an investor, sells jeweled lighter covers, “Buy Weed From Women” sweatshirts and other paraphernalia up front, and — after visitors say the password, “Billie sent me” to gain entrance — cannabis products in an elegant 1,500-square-foot, chandelier-hung space in back.

“We want to be a multistate operator, and this is what I can sell over the internet until we get to that point,” Beatty explained of using merch to build her brand while getting around advertising restrictions and laws preventing cannabis sales across state lines.

“We’ve brought in a lot more non-cannabis brands to do collaborations with because we do think that’s the future — it’s about how can we play around in that world and drive people to the other,” Beatty said.

Some cannabis brands have baked fashion into their DNA, including Sundae School, known for its Lychee Dragon 10 mg THC gummies, its Eureka Bullet mini joints — and its Korean-inspired streetwear, including whimsical bong-print mesh basketball shorts and T-shirt printed with the slogan “Sundae School: Minimum GPA required for matriculation is 4.20.”

Launched in 2017, Sundae School wholesales cannabis and pivoted three years ago to a direct-to-consumer model for its apparel, after several seasons of selling to Barneys New York, Saks Fifth Avenue and American Rag, among others.

The brand gained traction during the COVID-19 lockdown when it started to sell face masks, but it was fleeces that “changed the business,” said cofounder Dae Lim, who recently moved to L.A. from New York, where Sundae School has shown during New York Fashion Week Men’s.

“I should have thought of it earlier — our whole concept is smoke wear, but when we started, we were doing more structured pieces,” he said of how the relaxed outerwear has resonated with customers, including his mom.

Over at Pure Beauty, known for its powerful, sustainably grown flower and its playful packaging, showgoers were Instagramming photos of the brand’s trademark emoji-like eyes logo, and a supersized cannabis cigarette pack sculpture at the center of the booth.

Cofounder Tracy Anderson explained how the brand was inspired by the conceptual style of California artist John Baldessari, including his 1966 work “Pure Beauty.” “Cannabis is in the Venn diagram with art and fashion…it’s a perspective shifter,” he said, noting his brand’s recent collaboration with British streetwear line Aries and an upcoming project pegged to Palace Skateboards.

At the Potent Goods booth, Gela Nash Taylor of Juicy Couture fame and her son Travis Nash were showing their line of feather-trimmed hoodies, tropical floral and cannabis print silk kimonos and shorts, windbreakers and track pants, all with hidden stash pockets, alongside their new rosin vaporizer pens in matching patterns.

“I feel like it’s at that place where if we’re smart, it’s going to be insane,” Nash Taylor said of the fashion-meets-flower business she started last year with her son, who in 1988 was the baby namesake of her very first brand, maternity denim called Travis Jeans for The Baby In You.

“Everybody wants the clothes, but we have to figure out how we can sell them,” she said, explaining that there are some restrictions on bricks-and-mortar dispensaries selling non-cannabis goods. (Like many cannabis laws, the understanding and enforcement is somewhat murky.) For now, Potent Goods sells on its own website.

“I’m going to see if I can try to start old school getting it on Net-a-porter and Dover Street Market,” added Nash Taylor, rocking a kimono and vape pen necklace, while cooling herself with a Potent Goods paper fan and fending off showgoers trying to buy pieces from the clothing range, $95 to $250, on the spot.

“Nick Rhodes wants this one because John [Taylor] has been wearing it all the time,” she said, holding up a matching silk shirt and shorts set, in reference to her Duran Duran frontman husband and his bandmate, noting that they were celebrating the news of their induction into the Rock ‘n’ Roll Hall of Fame at the Hotel du Cap-Eden-Rock while she was selling cannabis in Cathedral City.

Not that she was complaining: “There’s a lot of energy here — at a fashion trade show, people are jaded and kind of mean. Here, everyone is pretty happy.”