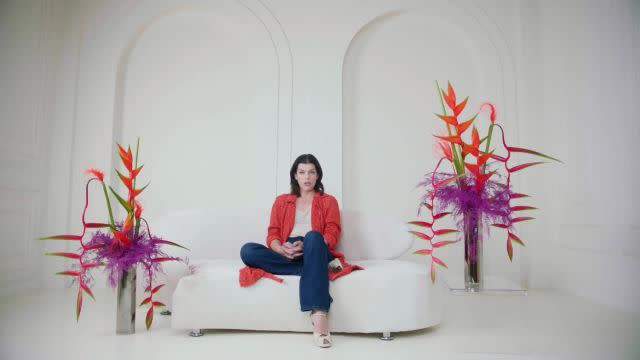 In 1997, the science-fiction film The Fifth Element by Luc Besson was released—and the character Leeloo, played by 19-year-old Milla Jovovich, was born. The flame-tressed humanoid is tasked with saving the planet and has quite the wardrobe—all designed by Jean Paul Gaultier—to go along with it. The most famous piece by far is a barely there white bandage bodysuit, which has inspired Halloween costumes for decades.

In a new video with Vogue, Jovovich recalls how she transformed into Leeloo. Nothing came of her first casting with Besson. However, when she ran into the director one hazy morning at the Chateau Marmont in Los Angeles, he asked her to film a screen test, and she got the role. “I can’t even describe how happy I was. This was really a dream come true,” says Jovovich. “I knew that this character was beyond unique and she was something that had never been seen before.”

As for the costumes, The Fifth Element team had to think of how to clothe Jovovich during her birth scene. First, she’s naked in a DNA-slicing machine, then she’s wearing the iconic bodysuit. The bandage idea was inspired by hospital gowns and wound care. “Being in a hospital, they put a robe on you that is open in the back so they can reach in and put injections and tubes,” says Jovovich. “So you have to have as little as possible, but for the sake of modesty, you have to cover up…. When people get wounded, like, they just put bandages to cover the necessary bits. And Luc and Jean Paul talked about this bandage idea, and Jean Paul was like, ‘Genius! I love it.’”

While Leeloo’s clothing has stood the test of time, Jovovich notes that her eternal desire to do good also lives on. “Leeloo is a bright, positive character. She brings out the best in people, and she is the best in all of us,” says Jovovich. “She is love. She is The Fifth Element in that sense. Her identity crisis only helped me discover who I was and who I wanted to be.”